On the previous page we introduced the topic of transits, in other words comparing two objects in line to help establish your position. If you can not only see the two objects but also identify them on the chart extract taped to your front deck, you can plot a "line of position" or LOP on the chart. You must be somewhere on that line.

If you can also plot a second LOP which intersects the first at a coarse angle, you must be where the two lines meet. This may be called a position fix.

In the image, the kayakers think they are in a direct line between Seal Island and Mythical Harbour, but they want to be sure. They can see a church tower on the mainland, in line with a flashing green beacon at the entrance to Mythical Harbour. Both objects are marked on the chart, and this gives them one useful transit (red dotted line).

For their second transit, there is a conspicuous church on Seal Island. However that's not much use because it is almost in line with the first range. If your LOPs meet at a coarse angle, ideally a right angle, it will minimize the errors which inevitably arise from doing navigation on the deck of a kayak. Otherwise a tiny error in measuring an angle or drawing a line on your chart extract could give you the impression that you are some distance from your true position.

Fortunately our kayakers can also see a single conspicuous object off to the side. It's a drilling rig, marked at night with an isophase white, red and green beacon. This is a fixed rig and it is shown on their chart. They get their second line by taking a compass bearing on the rig. See Using A Compass Afloat, below. They deduct 180 degrees from the bearing to find the reciprocal, use a compass rose to find the direction on the chart of that magnetic bearing, and draw a second LOP on the chart, starting at the rig. They must be where the two lines intersect, so they are halfway over but a little north of their intended route.

Of course if you have a compass you can find your position on the open sea by drawing two intersecting LOPs based on only two conspicuous objects, as long as they're widely separated from each other.

In reality, sea kayakers seldom make the sort of serious open-water crossing where the coast becomes a low grey line in the distance. We're seldom much more than 10 minutes paddle from the coast, and all we want to know is how far along the coast we have got. If you can see a conspicuous offshore object, find its bearing from you. Find the object on the chart and use a straight edge to plot the reciprocal bearing from it. Where that LOP intersects the coastline, there you must be.

A compass is just a needle which points to magnetic north, plus a ruler and/or protractor to show how a map or a nautical chart relates to the real world.

A compass is often useful to help you work out how the view in front of you relates to the chart extract on your front deck. It is occasionally useful if you want to fix your position by taking a bearing to a landmark and plotting it on your chart extract. There's seldom any point steering a pre-calculated compass course if you can see your destination. You're better off keeping an eye on your destination to see whether wind and tide are putting you off course, enjoying the view, and glancing over your shoulder every so often in case of traffic. 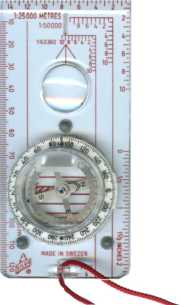 Most sea kayakers use a hiking / orienteering compass which can easily be put into a pocket. You can hold it in your hand and use it to determine the bearing of a conspicuous object ("sighting compass").

In poor visibility or when heading towards a coast with no conspicuous features you can also attach it to the deck at the front of the cockpit and use it to make sure your kayak is pointing in the right direction ("steering compass"). Rotate the circular bezel to set your intended course, for example 30 degrees magnetic. Slip the compass under your deck elastics so that the red arrow at the top of the baseplate points straight forwards. While you are going along, keep the compass needle parallel to the north-south grid on the bezel.

It's best to have a compass with a long baseplate and ideally a luminous dot on the north end of the needle. A long compass makes it easy to draw straight lines or work out a bearing on your chart.

For major open-water crossings, there is a lot to be said for having not only a hand-held sighting compass but also fitting a large steering compass to your kayak. See Deck Compass. For an expedition like that, GPS would not go amiss either. See GPS Satellite Navigation.

Nobody using a small compass on a very small boat is likely to achieve an accuracy greater than 5 degrees plus or minus. 10 degrees error is usual. The compasses of the age of sail were not divided into degrees, but into 32 points, each of 11.25 degrees. You may be able to achieve slightly better accuracy than the great sailors if you use a true "sighting compass" which enables you to see your target and the compass dial with the same eye at the same time. For example, the Silva Ranger 15, which achieves this with a fold-out mirror, or the Silva Explorer 54 (illustrated) which uses a neat little prism in the side of the compass. With either of them you may achieve an accuracy of 2 degrees, plus or minus, which we think is not really worth the extra expense.

Compass but no chart?

A compass is essentially an aid to chartwork but it is occasionally useful on its own. We have mentioned its use for transits, and it can also be helpful if you are some distance offshore when visibility starts to deteriorate (mist, fog, rain, darkness). You can quickly take a bearing on the nearest land. In other words, find its angle from north and follow that bearing to find your way home.

Compass with a chart

We have mentioned various ways in which you can get a position fix.

Say you are making an open-water crossing from Seal Island back to Mythical Harbour, on a course of 260 degrees magnetic. If the horizon ahead of you is misty or featureless but Seal Island is still visible behind, you can easily check whether you are still on course. Turn around for a moment and take a back-bearing on Seal Island. If it's 80 degrees (the reciprocal of 260 degrees) you must be still on a direct line between the two.

With practice you can develop the confidence to use smaller and smaller details on the chart to find your exact position. You're not sure whether you've gone past Deadman's Point? Let's say the Point is the place where two more-or-less straight sections of coastline meet at an angle of about 150 or 160 degrees. That's not a very obvious angle to the naked eye. The whole coast basically runs in the same direction. Let's say that east of the Point it runs along the 270-80 degrees line and to the west it is more like 240-50. If you sight along the cliffs with your compass, that should tell you which side of the Point you are.

My compass must be wrong

Trust your compass, not your instincts. You can check whether your compass is approximately right by comparing it with the position of the sun. In a northern winter, the sun rises in the east, goes round to the south and sets in the west. In summer it's more east-north-east in the morning, then south, then west-north-west in the evening.

In four situations, you may need to re-assess your direction:

1) Mis-reading the compass. Are you looking at the right end of the compass needle, and reading off the correct row of numbers?

2) Mathematical error. The big one is to find you are travelling on the reciprocal of the correct bearing. If you know you are supposed to be going roughly east, your heading should be roughly 90 degrees. Is it? Another, if you choose to work in both true and magnetic bearings, is to deduct magnetic variation when you should be adding it.

3) Magnetic deviation from putting your compass near other equipment. If it is lying on a iron bolt, near a steel knife or anywhere near a mobile phone, VHF radio or live electrical wire, it may not be pointing north.

4) Magnetic deviation from local magnetic anomalies. Compasses are unreliable in some geological areas. Parts of the Isle of Skye have their own strong magnetic field which can cause a 20 degree deviation. So can iron-bearing strata under the sea off the Yorkshire coast. Magnetic anomalies are marked on maritime charts.

GPS stands for Global Positioning System. Every outdoor sports shop seems to sell hand-held satnav devices. GPS is built into lots of mobile phones and even compact cameras. Your editor has never gone paddling with GPS ("I could hit the coast with a rock from here, what do I want that thing for?") so the information in these paragraphs is secondhand. To find out more see Sea Kayak Navigation by Franco Ferrero (Pesda Press 2007) or download the 200-page Basic GPS Navigation written by kayaker and pilot John Bell. His site was at www.smallboatgps.com but last time we looked the e-book had moved to here: www.scribd.com/doc/62065699/Basic-Gps-Navigation

About the same size as a small VHF radio or large mobile phone, handheld GPS units calculate the user's position and altitude by picking up signals transmitted by two or more satellites.

They have a small screen on which they display your position and altitude either as numbers (the chart co-ordinates) or graphically on a small black-and-white chart. More expensive units have a slightly larger screen which displays your position on a more detailed colour chart. This may require you to buy additional software with charts for your area.

GPS devices will also display an arrow showing the direction in which you should be going. Assuming that you correctly programmed the waypoints and destination, of course!

A GPS unit can be pre-set to work with the chart series you are using. You can use it to tell your speed over the ground, total distance covered, and the compass bearing and shortest route to your destination. This could be useful if you do a long open-water crossing in poor visibility and the course you calculated before setting off does not make proper allowance for currents and wind.

GPS is fine as long as you don't get so dependent on it that the data on the screen overrides your common sense, or you find when the unit stops working (flat battery, water ingress, lost or broken) that you have no idea where you are. The British Canoe Union 4 Star leader award does not require candidates to use GPS, but says that if a candidate chooses to carry one (s)he must use a unit which runs either Navstar or Galileo and must use it "in an effective way to aid [their underlining] navigation and obtain a position fix". In other words, the candidate is not to use it as a substitute for navigation using compass, timing and observation. 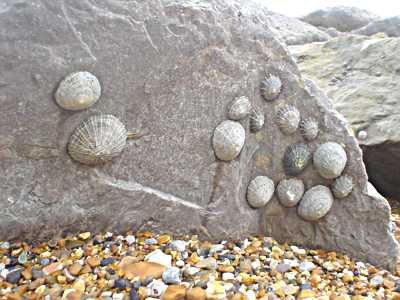