Every country has a few areas of coast or sea which are off limits to kayakers. Danger areas and exclusion zones are marked on up-to-date terrestrial maps, maritime charts and pilot guides. The latest developments relating to any particular chart are covered by Notices to Mariners which are usually available online. For the UK, Admiralty Notices to Mariners can be seen here on the Admiralty Leisure website.

At sea, danger areas and exclusion zones are often marked with a line of yellow buoys, although yellow buoys are also used to mark the boundary of harmless areas such as swimming beaches.

An area may be off limits for reasons of:

Military firing ranges are usually seaside ranges for rifles and machine guns, often on quite densely populated parts of the coast. There will be a large berm of earth to keep bullets off the beaches - but you never know.

Some military firing ranges are for larger weapons such as tanks, aircraft bombs and rockets, and naval shells. For example, the naval firing range in the eastern Solent, small arms near Lulworth Cove, tank and air weapons ranges in Pembrokeshire, and small islands in Scotland which fighter aircraft are gradually making into even smaller islands. Click here for general information, but be prepared to do a fair bit of reading and to make some phone calls. The Ministry of Darkness finds it difficult to provide accessible information about anything!

It is easier to find out about MoD activities that are a hazard to shipping. Firing times are broadcast by Clyde, Stornoway and Belfast coastguard as part of the GUNFACTS service. Click here for a table of broadcast times. Click here for information and charts relating to firing at Garvie Island (An Garbh-eilean) near Cape Wrath. Other military zones from which kayakers are intermittently excluded on the west coast of Scotland are the Faslane area, the BUTEC test range in the middle of the Inner Sound east of Raasay, and the warship experimental facility in Loch Goil. Finally, click here for information about the Joint Warrior exercises that run every year in Spring and Autumn in different locations around Scotland.

In Britain, boats are not generally excluded from naval gunnery ranges because firing only takes place when the areas are "considered to be clear of all shipping". The Ministry of Defence cheerily says that if by any unhappy chance they start firing while you are there, you should "endeavour to clear the area at the earliest possible moment. If projectiles or splinters are observed to be falling near the vessel, all persons on board should take cover".

Where can you kayak? 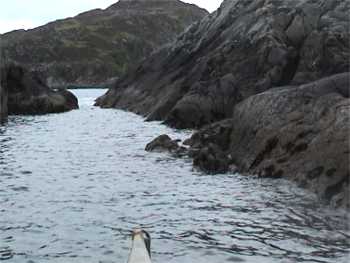 The following relates to legal access, and at present it covers only England & Wales. Scotland has a different legal system. If you'd like to help kayakers visiting or learning in your part of the world, feel free to submit a summary of legal access and we'll post it here. See Get In Touch.

You sometimes have to pay to park your vehicle near the sea, and in a few places the landowner charges a fee for launching kayaks. But in general you can go sea kayaking where you like. In the wilder parts of the world, you can camp where you like. See Overnight Trips.

In England & Wales, you can kayak anywhere you like, free of charge, on tidal waters except those which are off limits as above. The effect of the tide extends far up many rivers.

Non-tidal waters are very different. England & Wales are unlike Scotland and the rest of Europe because rivers are privately owned and there is seldom any access without the permission of the owner. On a good fishing river, the annual cost of renting the fishing rights for one kilometre will be more than most people earn in ten years. Anglers have been known to drop large rocks off bridges onto passing "pirate" kayakers (River Tamar in Cornwall), whip them in the face with fishing rods (River Seiont on Wales) or find the kayakers' cars and damage them. A pirate kayaker may also face criminal charges, so it is worth knowing where you can go legally.

There are legal rights to go boating on some non-tidal rivers because they have been highways for centuries. The general rule is that if a river was once a highway for commercial traffic, it is still a highway and can be used by kayakers. This includes some really lovely rivers where the commercial traffic was small barges hauled upriver by man-power centuries ago, such as the River Wye. Sometimes a fee is charged for use of these river highways, as on parts of the River Severn and various canals.

Access is permitted to a handful of other non-tidal rivers by permission or silence of private landowners. The only real way to find out whether you can kayak on a particular river is to buy an up-to-date guide book or join the British Canoe Union and ask their local Access Officer.

Where can you carry your kayak? 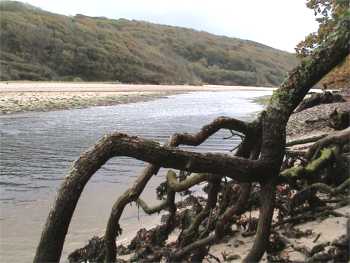 For the kayaker on foot, the foreshore below high water mark generally belongs to the Crown, which means you can walk or picnic on the beach, and you can camp on the beach overnight if you are discreet.

Perhaps 5% of the foreshore is privately owned by a harbour authority or handful of private landowners. For example, the estuaries of the Beaulieu river in Hampshire and the Erme in Devon. Private owners often protect the area from harm but allow free use by dog walkers, horse riders and users of small boats without engines.

To get to the water, you have a legal right to carry your kayak along any public highway such as a public road or footpath.

You may have a legal right to carry kayaks over private land to get to the beach, even if there is no footpath, but don't expect the landowner to be happy about it. In England and Wales there is a statutory "right to roam" under the Countryside & Rights Of Way Act 2000. 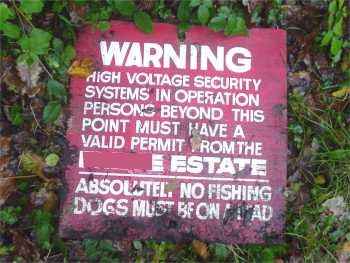 CRoW was intended to open up the countryside for recreation, and gives a legal right for walkers to go onto much private grassland, woodland or heath. You can find the full text either at www.opsi.gov.uk/acts/acts2000/ukpga_20000037_en_1 or by searching on the UK Statute Law Database at www.statutelaw.gov.uk

The original version of CRoW expressly did not give a right to go boating or swimming on any non-tidal water. Technically, the right to roam is a right to enter and remain on "access land" for the purpose of open-air recreation. The definition of access land does not include land within 20 metres of a house or a permanent barn or temporary pen used for livestock; any garden, park, golf-course, race-course, airport, railway, mine, quarry, etc; or land which has been ploughed or sown within the last 12 months.

CRoW has been amended by Part 7 of the Marine & Coastal Access Act 2009 which is intended to provide a two-metre wide coast path right round England and to improve rights of access to some beaches, cliffs, rocks and dunes in England & Wales for recreation on foot. It remains to be seen how this will be implemented in practice. Regulations and orders to be made under the 2009 Act will take account of environmental factors and the rights and activities of commercial and private landowners. The process is expected to be largely complete by 2019.

They arrange things better in Nordic countries, where walkers and kayakers have a legal right of access to wild land. The Everyman's Right is called jokamiehenoikeus in Finland, allemansrätten in Sweden and allemannsrett in Norway.

Pertti in Finland has collected information from other experienced sea kayakers, and provides the following information (thanks, Pertti!):

Finnish legislation has some vague references to kayaking:
- ”In all the waterways where it will be used, a water-craft must be safe regarding its structure, equipment, condition, and other features.” (see www.finlex.fi/fi/laki/ajantasa/1996/19960463, in Finnish)
- Kayaks are excluded from pleasure boat regulations, but no specific rules for kayaking equipment are declared. (see www.finlex.fi/fi/laki/ajantasa/2005/20050621, in Finnish)

A much more important legislative framework is ”Everyman’s Rights”; a principle found also from other Nordic Countries. These rights allows free right of access to the land and waterways no matter who owns the land. Everyman’s rights are summarised in http://www.outdoors.fi/hikinginfinland/rightsandregulations/Pages/Default.aspx

More detailed description can be found from http://www.ym.fi/en-US/Latest_news/Publications/Brochures/Everymans_right(4484)."

Thank you to Leif Jørgensen for this information:

"Allemansretten defined by Friluftsloven (1957)
Allemansretten grants us the priviledge of acces to the nature in "utmark" ( in outfields?,) with travel, stays (camping for a few days etc.), activisties and foraging within certain limits.
Utmark are uncultivated areas and includes most waterways, beachfronts, mires, forests, and mountain areas in Norway.
"Innmark" (real estate) are excluded and are defined as the private sone around houses of living and cabins, fields (growing fields, pasture fields and planting fields). Areas that may be defined as innmark are strighter for vacation properties than for first homes. Beachfronts are most often defined as utmark with restrictions for camping close to homes.

Camping are allowed for two days in utmark, but no closer than 300 meters from first homes or occupied second homes.

DNT (more than 500 cabins in Norway) and Kystleden rent out cabins and beds on the Norwegian coast.

There are a strong Leave No Trace ethos in Norway. Littering in utmark, and making campfires on rock, are not allowed"

Go to next page for:
• Codes of Conduct for kayakers