In 2008 and 2009, responsible bodies in the UK were becoming alarmed that today's children are likely to fear the natural world rather than want to play in it or protect it. 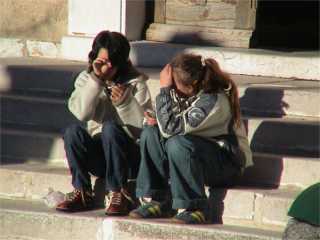 Natural England reported that the fears of inexperienced parents are putting the countryside and coast "out of bounds" to their children. The Woodland Trust agreed that in Britain "whole generations are growing up with little or no direct contact with nature".

They said parents "are not against their children going outside but are frightened of letting them do so... As children's lives become more and more sedentary there are real concerns about the increased incidence of childhood obesity, and other physical, mental and emotional health problems".

In 2008 Ed Balls, the British Secretary of State for Children said "while it is important for children to be safe, this does not mean that we should wrap them in cotton wool".

Even the Royal Society for the Prevention of Accidents (RoSPA) recently said "we need to ask ourselves whether it is better for a child to break a wrist falling out of a tree or to get a repetitive strain injury... using a computer or a video games console". 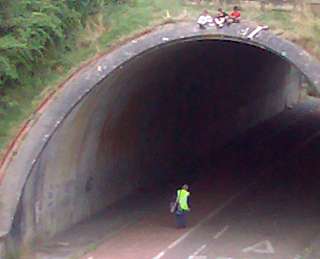 Is boating more risky than crossing the road, hanging out at the local shopping mall, dangling your legs over a 10-metre drop like these urban kids, or spending thirty hours a week in front of the TV screen?

There is also the question of value. Does boating teach more than hanging out at the mall? We think it does.

Kayaking is still on the syllabus of many schools in France, but in the UK very few state schools now offer the chance to do adventure sports regularly, and few parents can fill that gap for their own children.

Luckily there are still lots of kayak clubs where volunteers run free or low-cost courses leading to skills and leadership qualifications. See Sea Kayaking For Kids.

Compare that with the annual toll for all forms of kayaking in Britain - typically about 4 deaths and few significant injuries. That mortality figure is for kayakers of all ages and includes both extreme whitewater and drunken young men with no previous experience.

In 1993 four English schoolchildren died of cold shock, hypothermia and drowning on a sea kayaking course in Dorset.

This was followed by three prosecutions, and a public outcry which led directly to legal regulation for outdoor activities centres in the UK, a 60% reduction in the number of young people going on multi-activity courses, and even the closure of several outdoor centres (with a perfect safety record) run by local education authorities.

Nearly twenty years later the incident still haunts sea kayaking professionals, particularly in Britain. As we understand it, the Lyme Regis story was as follows. Pupils from a Plymouth school were taken to a privately-run outdoor pursuits centre in Dorset for a multi-activity holiday. The school did not know that nine months earlier one of the centre's instructors had given written notice to managers that systems at the centre had to change, because "otherwise you might find yourselves trying to explain why someone's son or daughter will not be coming home". Nor did the school know that two of the centre's instructors had resigned over safety issues.

On the day of the tragedy a group of eight children aged 16 and 17, accompanied by a teacher and led by two members of the centre staff, were to kayak from Lyme Regis to Charmouth and back, a trip which should have taken less than two hours. The pupils had had one hour of instruction in kayak technique and still had difficulty going in a straight line and staying upright. One of the adults had only a British Canoe Union "1 Star" qualification and another had paddled a lifetime total of 400 metres.

It was March so the sea temperature would have been about 7 degrees centigrade. See Cold Shock, Swim Failure & Hypothermia. The tide was setting away from the coast and there was an offshore wind of force 3-4. See Beaufort Scale For Kayakers. The group had wetsuits and lifejackets but no spraydecks, wetsuit boots or warm hats. We suspect that the wetsuits were cheap ones with non-waterproof seams and bad design such as small panels, ankle zips, etc. It is unlikely they were a good fit. Such garments are little use if you end up in the water. See Wetsuit. In these conditions, spraydecks and waterproof jackets are essential. Even by the standards of the day, the kayaks should have been fitted with positive flotation in the form of bulkheads or closed-cell foam pillars and buoyancy bags. The centre staff had no VHF radio or other way to call for help.

They set off at 10 am and things swiftly started to go wrong. From the start, the teacher could barely stay upright. The senior instructor decided to accompany him while the other one got the pupils to raft up.

The raft was blown away from the coast at nearly walking pace. The further offshore they went, the larger the waves became. As you would expect with wind of force 3/4, offshore there were waves 1 metre high with occasional breaking crests. Lacking spraydecks, the kayaks simply filled up. Lacking positive flotation, they sank and the children ended up in the water. They did not know it was possible to inflate their lifejackets to triple the amount of flotation. Floating low in cold, choppy water, they rapidly lost heat. Some started to inhale water from waves splashing in their faces. One after another, they became withdrawn, confused and started to have difficulty breathing. Several became unconscious.

The group should have been back for lunch by noon but was not reported missing until it was nearly four hours late. It took between two and three hours for them to be rescued, the teacher and one staff member by the inshore lifeboat and the others by helicopter. Four of the children died.

The company was convicted of corporate manslaughter and fined £60,000. The managing director was given a three year prison sentence. He had been based in London rather than at the centre but Ognall J commented that he had been given a "chillingly clear warning" of the need to improve safety at the centre and had been "more interested in sales than safety". The criminal case was R v. Stoddard & Kite & OLL Ltd (08.12.94 Winchester Crown Court, unreported).

The company tried to pass some of its civil liability on to HM Coastguard, alleging that the Portland Maritime Rescue Centre staff did nothing at all for an hour after taking over the search; negligently told both the lifeboat and the Royal Navy rescue helicopter to look along the coast rather than out to sea (so causing the helicopter to stop searching in the correct area); failed to alert another rescue helicopter until very late; and did not alert shipping. A fishing boat did in fact find a waterlogged kayak floating offshore but was not aware of the emergency and did not report it. In the High Court, May J did not decide whether there was any truth to those allegations. He struck out the claim on the basis that it would be wrong to allow people to sue the Coastguard where it had not caused the deaths by a positive and direct act of its own. OLL Ltd v. Secretary of State for Transport [1997] 3 All ER 897.

An independent investigation chaired by John Reeder QC heard that the Coastguard Agency had carried out its own investigation, reorganised Portland MRC and sent its staff for re-training.

According to the parliamentary reporting service Hansard he recommended that no further disciplinary action be taken, but made a number of recommendations for further changes to the Coastguard Agency's systems.

See also the Adventure Activities Licensing Regulations 2004 at www.opsi.gov.uk/si/si2004/20041309.htm and the website of the Adventure Activities Licensing Authority. AALA produces reports and recommendations based on an expert knowledge of the practical issues and reflecting their view that outdoor pursuits have a significant social value. www.aala.org

In recent years many countries have introduced "child protection" legislation to safeguard children who have contact with adults in the absence of their own parents.

Such legislation typically requires or recommends that voluntary and sports organisations should run a check on any adult members who are to accompany or instruct children, or requires the adult member to arrange this and produce a certificate.

If you are an adult having any contact with children other than your own, for example as a voluntary kayaking instructor, leader or even participant on a kayak trip involving children, you should check the current legal position.