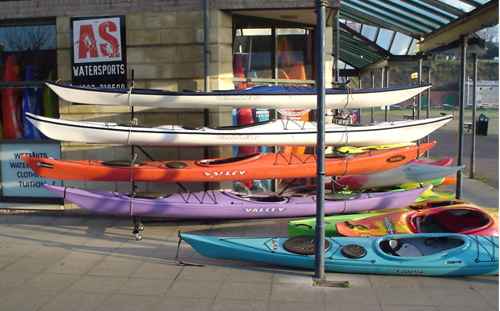 Most of these suppliers are in the UK. For the USA and Canada see www.kayarchy.com. Smaller kayak manufacturers often sell direct to the public. Increasingly, composite sea kayaks that were made in Europe or North America are now manufactured overseas, mainly in China.

There are a lot in the UK, some are online only, and many of them handle only white-water or flat water boats. We can't list them all so we'll just list our favourite. Below we also mention shops which seem to be the sole UK outlet for certain kayaks.

AS Watersports has been part of the kayaking scene in south-west England since Mitch opened for business in 1982. "The Shop Formerly Known As Alternative Surf" stocks and sells sea kayaks, surf kayaks and white-water kayaks, both new and secondhand. The shop carries a big range of paddles, clothing, accessories and spares. The team also provide advice, and carry out repairs to polyethylene kayaks.

In general see The Sea Kayak. Most kayaks are designed to carry a kayaker plus either a small load for day trips or a large load for overnight expeditions. Expedition kayaks are longer, heavier and have higher volume than dayboats. See Intended Use. All kayaks have limitations. In a cool climate, sit-on-top kayaks have a lot more limitations than most. Short, fat boats are cute and cheap, but at sea they're slow, wet and often uncomfortable. See Why A Long, Narrow Kayak?

Most kayaks are intended for men or women, but that means they have to have enough volume to support the weight of an adult male kayaker. For slimmer, lighter kayaks see Sea Kayaks To Fit Women.

Above, we've listed manufacturers and imports of unisex sea kayaks. These are designed to carry the weight of the average male kayaker, say 65-85 kilogrammes, plus a small load. A woman weighing 50-60 kilos can certainly paddle such a kayak but its size, width and weight can be a real disadvantage on day trips. See Man, Woman Or Child?

We believe the solution is 5% less length and 10% less width at the waterline. This means that the kayak is no slower and can be considerably lighter, which makes it a lot easier to handle ashore.

The photo above shows two Greenland kayaks from the rear, to exactly the same scale. The one on the left is an Anas Acuta, a fibreglass dayboat made in England by Valley Canoe Products. The one on the right is a skin-on-frame kayak built by Richard Best. They are almost exactly the same length, overall width and depth. Valley tell us that the Anas Acuta has a volume of 297 litres. Experience tells us that it is perfect for a kayaker of 60-80 kilos, or up to 90 kilos if there's no load. The SOF kayak has an estimated volume of 240 litres. The difference in volume is mainly because the SOF kayak is 10% narrower at the waterline. It would feel tippy to most male kayakers, but a woman is generally less top-heavy than a man.

With a man in the Anas Acuta and a woman in the SOF boat, both kayakers are comfortably stable but the man has to work pretty hard to keep up.

Home-build kayaks for women
Below we list several major suppliers of sea kayak kits & plans, and some of their designs are very well suited to women paddlers. If you want a very light, fast boat we like the DK21 design from Dennis Davis:

He sells plans for this stitch-and-glue plywood design which is 4.82 metres long, 58 cm wide and can weigh as little as 13 kg. Unusually for a plywood kayak, the underwater cross-section is rounded, not angular. This means a lot more speed at the expense of some stability, achieved by using 3 mm plywood rather than the usual 4 mm. Perfect for a smaller paddler for estuary use and fine days at sea. Dennis charges about £15 for a set of plans. www.dennisdavisdesigns.weebly.com, e-mail to dddesigns

For quick building using the skin-on-frame method there are many free designs on Tom Yost's inspirational site at www.yostwerks.org. All are light in weight, and you can choose a length and width to suit yourself.

Your own kayak is probably about 5 m long, 58 cm wide and 26 kilogrammes. Imagine if it suddenly ballooned to 80 cm wide and 36 kilos. And your paddle got so long and heavy you could barely lift it. You are just not going to enjoy yourself.

A teenage boy may get on well with a sea kayak designed for a woman. If you want a kayak for a smaller, lighter paddler you will probably have to build one or travel some distance to buy one. For guideline lengths and widths for children of different weights and ages, and sources of plans for kayaks you can build at home, see Child-Sized Kayaks.

2013 update from Karl in Schwerin (Germany)
Karl lives next to a big lake and about 45 minutes from the Baltic, and he looked into the sea kayak market in search of for something for his 7-year-old. He comments:
"Prijon has ceased to produce the "Viper". The follower is named "Seayak Junior" (383x56) and comes in a "Basic" and "Pro" version. Recommended end user price is from 631,- EUR incl. VAT, excl. shipping and rudder. More on http://www.prijon.com/produkte/tourenkajaks/kinder--und-jugendkajaks/index.html
Current Designs' "Raven" (366x51) should be available here in Europe, since they have a German homepage about the boat. Completely equipped, it is priced at roughly 1,500,- EUR incl. VAT. More on http://www.cd-kayaks.de/current-design-kayaks/details/spezialitaeten/all-styles/raven/70/
Another option is the "Tsunami SP" (366x53) by Wilderness Systems. Although the manufacturer gives no price for DE, you should be able to get this boat in DE for anything between 700,- and 850,- EUR incl. VAT. Some re-sellers:
679,- EUR bei http://www.kajakladen.com/wanderkajaks.htm
799,- EUR bei http://www.ekue-sport.de/
850,- EUR bei [ebay link supplied] in 17139 Gielow
You may argue that "Carolina 12.0 XS" (369x58) by Perception is no sea kayak, and that production has ceased. Probably right. More on http://www.perceptionkayaks.com/product/index/products/discontinued_models/carolina_discontinued_models/carolina_12_xs
However, it seems to be on stock for 700,- EUR incl. VAT e.g. at http://www.ekue-sport.de/perception-carolina-12xs"

You can surf quite a few styles of kayak, but there are specialist designs which perform much better. See Kayaks For Surfing.

Designed to go long distances in a straight line, performance touring kayaks, ocean race kayaks and ocean racing skis are very attractive but not everybody's ideal sea kayak. They are not suitable for rock-hopping because they lack manoeuvrability, and they are often lighter and less tough than a standard sea kayak.

In general see Folding Kayaks. One great thing about them is that a manufacturer can always post them overseas. Wherever they're based, all of the following have an English-language website. Klepper, Nautiraid and Long Haul have all supplied folding kayaks to the armed forces. Klepper is said to have been making kayaks longer than anybody in the world.

Avoid the beach toys, unless a beach toy is what you want. These manufacturers make rugged inflatable kayaks:

Build your own folding kayak

There are many free designs on Tom Yost's inspirational site at www.yostwerks.org

The style of paddle you use is not important as long as it is strong. In general see European-style Paddles and Greenland Paddles. If you choose a Greenland paddle, you can quite easily make your own.

Most paddle manufacturers sell only through retailers. Those which are underlined below also (or only) sell direct to the public.